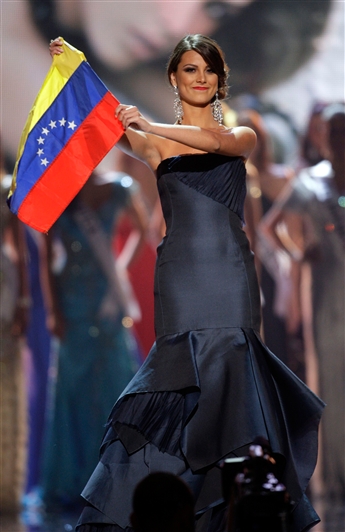 Socialism: Quick, what’s the murder capital of the world: Kabul? Juarez? Try Caracas, Venezuela, a city whose dictator, Hugo Chavez, has made murder a means of extending his control.

The silent protest at Monday night’s Miss Universe Pageant in Las Vegas was invisible to nearly everyone — except Venezuelans. On her final catwalk, the ranking Miss Universe, Stefania Fernandez, suddenly whipped out a Venezuelan flag in a patriotic but protocol-breaking gesture.

Fernandez waved her flag for the same reason Americans waved theirs after 9/11 — to convey resolution amid distress. Her flag had seven stars, significant because Chavez had arbitrarily added an eighth, making any use of a difficult-to-find seven-star banner an act of defiance.

Fernandez’s countrymen went wild with joy on bulletin boards and Facebook, showing just how worried they are about their country. Their greatest fear is violent crime.

Ever since Chavez became president in 1999, Venezuelan cities have become hellholes in which murder rates have more than quadrupled. At 233 per 100,000, or one murder every 90 minutes, the rate in Caracas now tops that of every war zone in the world, according to an official National Statistics Institute study released Wednesday.

In fact, crime is the defining fact of life in today’s Venezuela. About 96% of all murder victims are poor and lower-middle class, the very people Chavez claims to represent. “Don’t venture into barrios at any time of the day, let alone at night,” warns the Lonely Planet guide to Venezuela to hardy adventure travelers.

Make no mistake, a murder rate like Caracas’ is a crime against humanity. The absence of personal security renders all other human rights moot. By coincidence, that’s just what Chavez seeks to eliminate as he turns his country into a Cuba-style socialist state. Instead of Castroite firing squads or Stalinesque gulags, Chavez outsources the dirty work of socialism to criminals while throwing dissidents in jail and threatening to censor newspapers.

He may try to suppress the Dante-like photos of corpses piled high at the Caracas morgue from the El Nacional newspaper, but the hard fact is that Chavez is responsible for what’s going on.

Early in his reign, he fomented class hatred by justifying theft so long as it was carried out by the poor. His arbitrary expropriations and encouragement of squatting on private property also contributed to an atmosphere of lawlessness that has since exploded.

Chavez also demeaned work, urging the poor to take his handouts. As a result, 40% of Venezuela’s 20 million workers are now unemployed, with seven of eight not wanting work, according to the National Statistics Institute.

“It may be that the Chavista giveaways provide free time for the criminals to spend doing their thing rather than being dutifully employed and thus busy,” wrote the Venezuelan blogger at The Devil’s Excrement Web site.

Then there’s Chavez’s encouragement of the drug trade. In 2005, he cut off cooperation with the U.S. Drug Enforcement Administration, calling U.S. agents “spies.” The move opened Venezuela’s vast territory to drug traffickers fleeing the crackdown in Colombia.

Drug cash bought off government officials, with a 2009 U.S. government report noting that the Chavista regime includes drug kingpins at top levels, and that the National Guard, which controls ports, has been bought off by traffickers. Today, nearly all drug flights heading to Central America, the Caribbean and Africa originate in Venezuela.

By permitting FARC to operate in his territory, Chavez has also become an undeclared state sponsor of terror. FARC now controls 60% of Colombia’s cocaine production and kidnaps, murders, extorts and people-trafficks inside Venezuela.

The cartel’s free rein means Chavez may now be powerless to control it. Like a deal with the devil, it is penetrating government and may eventually topple Chavez.

Meantime, Chavez is using crime as a tool to oppress. Why that doesn’t merit sanctions by the international community remains a mystery.