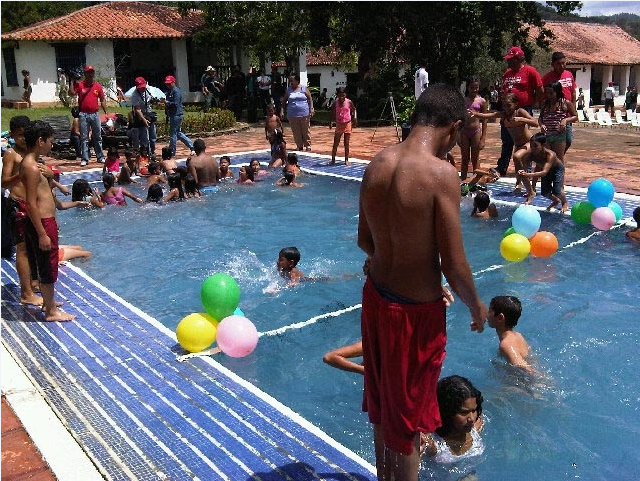 Socialism: After 12 years in power and $960 billion in oil earnings, Venezuela’s Hugo Chavez is down to stealing private swimming pools to bring the good life to Venezuela’s “poor.” It’s a new milestone on his road to ruin.

Acting like Robert Mugabe on cocaine, Venezuela’s dictator went on a shopping spree over the weekend, confiscating one farm and industry after another.

First, a flour factory run by Mexican multinational Gruma was plundered, followed by the nationalization of a bauxite unit of U.S.-based NorPro. After that, a steel subsidiary of Luxembourg-based Tenaris called Matesi was taken, along with a group of transport companies.

Unsated, Chavez then announced — via Twitter — the takeover of the private University of Santa Ines in Barinas state. And for good measure, he launched new exchange controls, another form of expropriation.

One taking stood out, however — a 370-acre ranch in Yaracuy state that grows oranges and coffee and raises cattle with 38 shareholding farm workers. The scenic property on an otherwise desolate stretch of highway is owned by Diego Arria, Venezuela’s former president of the U.N. Security Council. It’s been in his family since 1852.

Arria had spoken out against Chavez, so Chavez got personal. “If he wants to farm now, he will have to topple Chavez, because this now belongs to the revolution,” El Presidente pronounced.

Arria told IBD he’s been pressured for two years with acts of vandalism and the kidnapping of farmhands. A month ago, Chavista Ministry of Culture operatives approached him in Norway, demanding that he quit criticizing the Chavez regime. If he didn’t “play ball,” he’d lose the ranch, Arria was warned. “But I never negotiate with thugs,” he said.

Chavez’s red-shirts finally acted over the weekend, opening the farm to “the masses” in a show of class warfare. Chavista leaders from the National Institute of Lands headed first to Arria’s living quarters, rolling over his bed, pawing through his wife’s clothing and desecrating a chapel dedicated to the Arrias’ late daughter.

For their big photo spectacular, they hauled in 300 or 400 children to swim in Arria’s swimming pool, ride the ranch horses and tour the main house — encouraging the kids to take “souvenirs.” Chavez said it was all proof he was “socializing happiness.”

In reality, the attack on Arria’s farm was proof of Chavez’s own failures. Unable to create any prosperity, even after 12 years in power and a trillion dollars in oil cash, Chavez still resorts to crude medieval plunder to bring any spoils to his supporters.

It would be logical to think Venezuela’s oil earnings would be sufficient to build swimming pools for the children of Yaracuy. But Chavez’s destruction of property rights and rule of law from these confiscations — now numbering 500 or so, have ended any prospect of prosperity coming to the country’s poor.

Not a single expropriated property in Venezuela produces what it produced when it was privately owned. In a year Arria’s ranch will be a wasteland, and Venezuela will find itself importing even more than the 76% of its food it now imports.

With disrespect for property rights goes disregard for human rights, as the confiscation of the Arria ranch attests.

Item was linked on RealClearMarkets on May 17, 2010