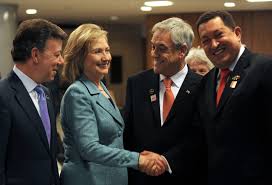 Diplomacy: If there’s any doubt that U.S. kissing up to Venezuela’s Hugo Chavez has been a disaster, note the mutual expulsion of envoys Wednesday. Some diplomacy. This is the product of appeasement, not strength.

It was quite a bright dawn two years ago when President Obama and his Secretary of State, Hillary Clinton, went out of their way to make nice with Venezuela’s Hugo Chavez at a summit in Trinidad. They shook hands, touched him like an old friend, accepted his insulting anti-American book as a gift, and declared they were “there to listen” as the diatribes flowed.

Instead of improving relations, we can now see where that leads — to a fast deterioration in ties.

So President Obama and some of his political appointees at State seem to think the way to handle him is to appease him — even as evidence mounts that he’s a predator.

Chavez refused career diplomat Larry Palmer as U.S. ambassador to Caracas because he made “aggressive” and “unacceptable” attacks on his rule. In fact, Palmer merely explained to the Foreign Relations Committee at his Senate confirmation hearing last June that morale is low in Venezuela’s military and the government is sheltering drug-dealing guerrillas from Colombia. All true.

It was enough for Chavez to throw a tantrum and reject the president’s choice of envoy, as well as place himself in a position to bully the U.S. into nominating an ambassador of his choosing.

The U.S. — rightly — kicked Chavez’s own envoy out in retaliation for this thuggery. But even that packed less punch than it should have because Assistant Secretary of State for Western Hemisphere Affairs Arturo Valenzuela, a former board member of La Raza, merely revoked Ambassador Bernardo Alvarez’s visa instead of the much tougher act of declaring him persona non grata.

They also dragged Palmer’s nomination out for six months, which gave Chavez the time he needed to step up his attacks.

It’s all part of a message, sent again and again, that Chavez’s tantrums don’t matter, his acts don’t matter and all that matters is not confronting him. It will only get worse from here.